So this year, I decided my goal would be to try and use the fabric I had..
I have a tendency to stock up during good sales, with no real use in mind.
January 1st I looked at my stash and pulled a bundle of hyperreal garden I had 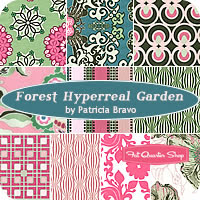 photo courtesy of Fat Quarter Shop
Initially I had thought i'd use this in some patterns with large pieces, to show off the fabric
I liked the pinks and greens but hadn't come to any conclusions.. until now.
January 1st, I pulled this bundle (I had 1/2 yard cuts of all but this one)
For a long time i'd also been eyeing the plus sign quilt design.
Especially after seeing Jeni's tutorial
I began cutting the pieces and laying them out.
As I was doing this my mom asked me "who this one was for"
I have a tendency to make and decide that way later :)
Since I had no one in mind I decided it would be kind of "up for grabs"
After talking with her, I had a better thought and I broke up the design into two pieces 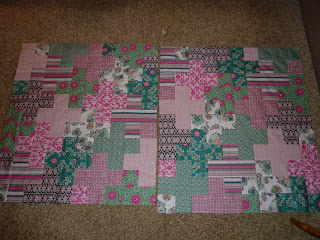 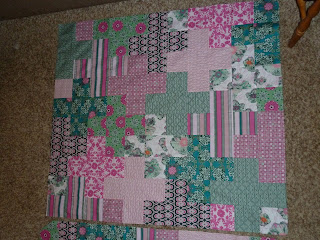 Perfect size for a baby quilt or even a cuddly blanket for a younger girl
:)
SCORE!
Needless to say, thats what I did.
January 1 - I sewed, and sewed and sewed
pieced both tops, basted and pinned one 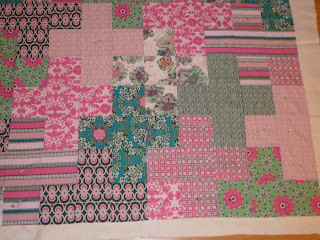 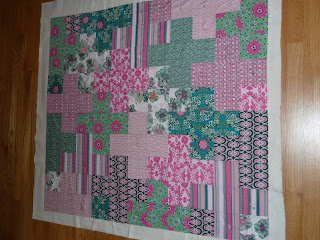 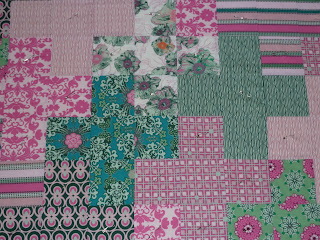 Now, I have one done and the last needs quilting and binding
Hopefully this week
Once it's a nice day i'll get some better pictures
On the plus side (pun intended haha) these are part of my FAL list!
So progress is being made :)
(Check the "participating" link to see where I'm linking up!)
Posted by Jennifer at 8:27 AM